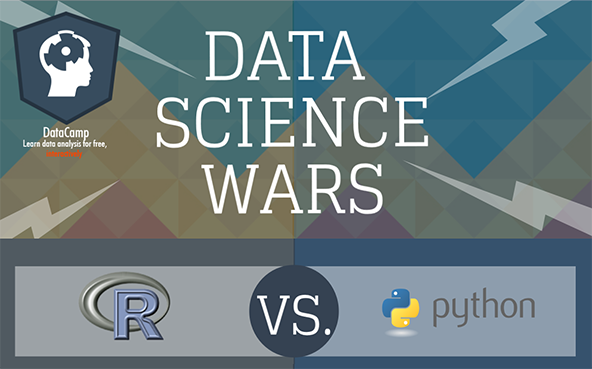 The debate is futile because every computer language has a reason to exist, otherwise *anything* can be achieved in C Language, on *any* OS… trust me!

We all have seen this debate of dotNet vs JAVA, until the emergence of Mobile Apps era, and now those debaters are busy doing apps for mobile platforms, in JAVA, and all sorts of “weird old” and “inspired new” languages… right? (Pun intended) 🙂

Then came the Big Data and Data Science boom, and so the debate of choosing between the two main open source languages R and Python, amongst the practitioners of Data Analysis and Data Science. I have been watching this argument for quite some time now, and in my personal opinion, it’s just a matter of choice, which involves ease of use, target platform, tooling, syntactical benefits, and largely, the function library (call it packages, modules or etc.) that the language and its community has to offer.

I personally like both. I use R with R-Studio for exploratory data analysis and data visualization tasks, and feel comfortable using Python with Visual Studio for tasks which require deep programming logic and automation of certain tasks, for example automation of OS specific jobs, machine learning tasks, web scrapping and use of APIs.

Just Before I posted this blog, I came to know that the KDnuggets’ Annual Poll for Analytics, Data Mining software used (May 2015) posted their results where R is the top choice for data miners and Python is gaining significant momentum, with 30% share in top tools. Check the link above for details.

Guys at datacamp.com recently did this comprehensive infographic (see below) which includes a ton of research on the subject (Original article: Choosing R or Python for data analysis? An infographic). Although this work would have concluded the argument already, until Martijn Theuwissen and Anna Anisin from dominodatalab.com came in with this post “Comparing Python and R for Data Science” to put the final nail in the coffin of this argument.

This site uses Akismet to reduce spam. Learn how your comment data is processed.