UPDATE: According to Microsoft, the product is graduated to become a Silverlight web control, and is available at Silverlight PivotViewer. The website initially hosting Pivot at getpivot.com is no more active. Links blow are updated accordingly.

Yet another beautiful piece of software form MS Live Labs: Pivot, a fun way of exploring and visualizing data. Here 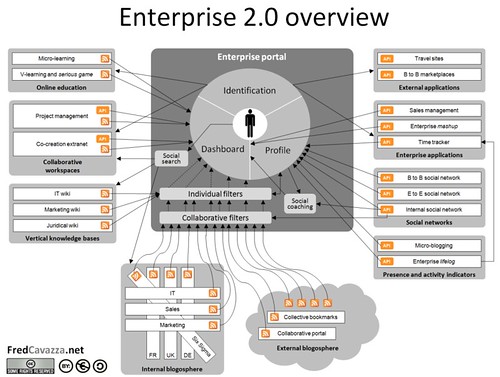 Found an excellent article on Enterprise 2.0 Concepts, including a great visual summarizing it up. A good read for management perspective.

Just found a good feature of WCF, which seems quiet useful for distributed application developing/deployment practices. Through Net.TCP Port Sharing Service, Windows Communication Foundation (WCF) allows different processes to share the same TCP Ports. Now you can deploy your .Net based network services side-by-side with IIS on port 80 or 8080, the standard HTTP and HTTP Proxy ports you find open in many firewalls by default. No need to mess around with client

I  must say that this folk Anders Toxboe has done a great job by bringing many cool best practices of modern UI design in one place. And as he says, this is not the first site for this kind of effort, Yahoo Developer Network  and Welie.com also has rich collections if UI design patterns as well.

I think these are good reads for software architects, information architects, usability engineers and certainly for web designers and SQA pros of today for building effective business applications of tomorrow.

Yes! this is sync for all…Microsoft Sync Framework…the anywhere, anytime, any device thing, which is currently available in CTP, and will hopefully be released as part of Visual Studio 2008. Countdown for release of VS2008 has already begun, and it is arriving this month.

Here’s a chunk from MS on the Sync Framework:

Architects and developers and have been developing such custom frameworks for pretty much every large-scale enterprise application. Even I have designed a very light-weight object oriented SAF (Store and Forward) Framework for a system where MSMQ is not appropriate. And yes, for many occasions, these frameworks are one of the the core components of any multi-node, service oriented system. Replicating files or SQL data, passing object oriented messages, either pushing new configurations to nodes, or pulling generated files in the center…we have always used MSMQ, custom schedulers for FTP and web services calls, socket server, 3rd part tools and etc.

The Microsoft Sync Framework is the definite answer to all such needs and for solutions of any scale. I would say that this framework is going to be the heart of all the future SOA based enterprise solutions to be built on Microsoft platform.

This out-of-the-box system can be used in heterogeneous environments, where many tools and utilities are used to integrate loosely coupled multi-platform systems. To have an out-of-the-box experience, many enterprises are using Microsoft BizTalk Server as the core integration hub for integrating in house systems as well as for dealing business with outside world.

BizTalk is a mammoth of SOA jungle…many cant afford it, and many find it an overkill for small or mid size solutions, but hey, now you can have your own BizTalk Mini which can fit anywhere, and here is the formula:

Take .Net Framework 3.5, build required custom synchronization providers for Microsoft Sync Framework, use WCF (Windows Communication Foundation) where appropriate. Lets call them adaptors. Use some Plug-in Framework to raise the level of abstraction for the adaptors. Have a flexible Task Scheduler in the core, along with yet again, a Plug-in based WF (Workflow Foundation) engine, and certainly…the SQL 2005 or SQL 2005 Express as the universal data store, and you are done. All what is left are UI Tools for monitoring and configuration management initially, and many bells and whistles can be added further.

Yeah I know this is no match for BizTalk at all, but trust me, this is a BizSecret I’m revealing here for nothing…one can build a light-weight business process orchestration engine on top of this which can manipulate data from/to any data source. This was the first idea that came into my mind when I read about Microsoft Sync Framework. I will start a POC (Proof of Concept) solution on the idea as soon as I get some time, and I would love to start an open source project based on this idea and any volunteers are welcome.

IBM developerWorks has yet another great atricle on BPEL using UML, by Keith Mantell, IT Architect at IBM:

Radio Frequency IDentification (RFID) is the next big thing for automated enterprise. With its 99% success rate in the industry, it has got attention of the software giants. According to ORACLE, RFID is the biggest shift in the supply chain management since the Internet.

Here’s what you need to know about RFID:

The Definition and FAQs: